Greece and Turkey: “We are not rich, but rich at heart”

Greece and Turkey: “We are not rich, but rich at heart”

WE ARE (VERY BRIEFLY) IN GREECE!

We ride with a tailwind at high speed towards the Greek border. When we cross the bridge, the Bulgarian border post looms up first. The man wishes us a good journey and we cycle through one kilometer of no man’s land. Apparently the trucks are still allowed to drive 100 km/h here, but fortunately they make room. At the Greek border there is an old car wash with a sign: ‘disinfection point’. Fortunately, as cyclists, we don’t have to go through it. Yes! 😀

At the second village we stop to eat something and drink a Greek frappé. The conversation starts funny because the lady of the bar doesn’t know English, but the whole terrace is brought in. Then someone appears to speak German and we get all kinds of tasty things. Stuffed we climb further up the hill. Many cars honk or people wave enthusiastically. On an old road, where few cars drive and mostly weeds grow out of the asphalt, we ride on. We enjoy it and cycle along sunflower fields, lavender fields and lots of agriculture. We drive the last part on a highway where the speed limit is 100 km/h, but fortunately there is an emergency lane! In Kastanies we do some shopping and that night we camp in the wild by a river. But not before we have become friends with the pack of stray dogs and have taken a dip in the river.

We drive into Turkey through the border at Edirne. There are soldiers with big guns along the road and it is forbidden to take pictures. Despite this we feel a healthy tension. For the first time we have to have our picture taken and undergo a luggage check. Yet we are soon on the road again! Not much later the city of Edirne looms up with its gigantic mosque with the highest minarets in Turkey. In Edirne we have lunch and immediately get ‘çay’ (Turkish tea).

When we continue our journey in the afternoon under the burning sun at a temperature of 35°C, on major roads without shade, it is immediately clear that it is going to be a tough trip from here on. There is no straight road, only up and down hills. The views, on the other hand, are insane. We see agricultural fields everywhere. We eat ice cream in a village and are offered cherries from the table next to us. The asphalt literally melts under our tires and as if there is Velcro under them we climb up the hills. Sand is sprinkled on the road to keep the asphalt somewhat passable. We rest under a bridge where the only shade is. Just at that moment a truck stops next to us, the driver is going to take a nap with the engine running. It is all possible!

At the end of the day we look for a wild camping spot near a small lake. The lake itself is polluted and not suitable for swimming. The locals are fishing there and bring us food and drinks. Robert, the Dutchman we sometimes cycle with, also comes to the lake. Because it was such a hot day, we don’t have enough water left. So we decide to knock on the door of the only house at the lake. Yuksel opens the door and gladly fills our bags with water. He is curious and within seconds invites us inside. He shows us his large garden with every kind of fruit and vegetable you can think of. We are given cookies, coffee, a kilo of cherries, cucumbers and plums. Yuksel speaks a little English, because he has worked in the tourism industry. Now he is retired. He is proud of his garden and invites us to come back tomorrow morning for breakfast. Packed, with a few liters of water and kilos of fruit, we return to the campsite. A little later, Yuksel and a friend stop by to check on us again and invite us back for breakfast. At breakfast we have a conversation about life in Turkey and beautiful places in the country. When we leave, we want to give some money for all the food and drinks. Yuksel refuses and says, ‘we are not rich, but rich in the heart.’ He even walks with us to escort us past the more than 7 guard dogs of a farmer down the road. We are so curious about the rest of Turkey and all the encounters that are yet to come!

In a small settlement we stop to see if we can have a drink since it is already very hot. There is a small village café with only tea-drinking men on the terrace. Eloy goes to check it out and doesn’t come back. He is immediately expected to sit at the table and is given plums for his nose. Communicating is difficult since nobody speaks English, but with a translation app it works somewhat. The men are amazed, they pay for our water and the conversation ends with the following translation that rolls out of Google Translate: “Turkey welcomes all guests of the world, we welcome you on behalf of the state, we wish you a life full of love and happiness, we are always waiting for you.” Now that’s an incoming call.

Not much later we pass through Pinarhisar. We ask at the town hall for a stamp in our Sultans Trail booklet and then tea follows. The mayor is not here today and the others are not really aware of the Sultans Trail that we follow, but that doesn’t make them less interested! Hulya and Hami see that we don’t have a Turkish flag on our bikes yet, so they quickly run back into the town hall to get one. They invite us for dinner and a place to sleep, but since we still have to cycle a bit, we have to decline. After all, Mom and Ashley will already be in Istanbul in 2 days!

In Saray, we spend the night with Ömer (via Warmshowers). He is 19 years old, loves cycling and wants to improve his English. Therefore, he invites people into the former family home. He takes us to a typical Turkish restaurant and we chat all evening about everything. After breakfast we go by the town hall and there we get another stamp in the Sultans Trail passport. Eloy also gets a handmade bag as a gift. What we don’t know is that in the meantime they have informed a chasing squad. As we climb out of Saray we meet the German Peter, on his way from Munich to Istanbul. Not much later we are stopped on the same road by the mayor of Saray and invited for coffee in the village down the road. He is delighted that we are here and when he hears that we follow the Sultans Trail he gets very enthusiastic. Photos are taken and not much later other important figures join us in the restaurant (the village chief, etc.).

When we continue the road again it is tough. Lots of steep hills and dusty truck traffic because of the stone and sand quarries in this area. We are sweating like crazy. A man stops his truck and asks if we want to come along with the bike in the back. We decline this proposal, although Eloy does see the sense in it. We now ride into the district of Istanbul and the street dogs become a problem. There are hundreds of them, along the road, in the villages. They are also becoming more aggressive. Fortunately, so far the Dazzer (a device with a very high beep, which we do not hear) is helping reasonably well! Just before the village where we want to stop, the D020 road becomes gigantic. A multi-lane freeway with the occasional emergency lane missing. It also starts to rain. We see a restaurant on the map and stop there to eat. The place looks a bit deserted, but there is a real animal chaos. Chickens, geese, a cow, a goat walking through the restaurant, dogs, cats, etc. We could stay the night in the prayer house, with the Koran above our heads. A very special place. The owner brings coffee and more coffee and he doesn’t want us to pay.

Once back on the road, it is now about 40 km of biking on a busy road, which eventually becomes a highway. We cycle on the emergency lane, still going up and down. The emergency lane is also used for parking, for chatting, by dogs and by slow road users (e.g. slow trucks that don’t make it up the mountain), yay! On top of a big mountain, we see the Black Sea in the distance for the first time! We know that the roads leading to Istanbul are all not very nice, but try to make the best of it. We cycle past one of Istanbul’s airports, where three-lane roads come together from 2 sides and we have to cross those busy insertion lanes all the time, while trucks and cars race by. Actually, we’ve had it, but there are no other options now but to keep going.

At Göktürk we stop after 40 km of highway. From here we follow a road through the forest and under aqueducts. When the Bosporus rises before our eyes we are glad. The Bosphorus is the strait that separates the Asian and European continents. It also means that we are a stone’s throw away from Istanbul. We sit for a while along the water’s edge to let this moment sink in. Of course, we are also immediately subjected to a bicycle inspection by curious cyclists.

It is Saturday and families are everywhere along the Bosphorus. People are swimming, eating and fishing. It is a special sensation. We cycle along the waterfront as much as possible and see many smiling faces. Men who give us the thumbs up and of course also Dutch people who talk to us because of the flag on our bicycles. The last 20 km along the water to the center of Istanbul go very slowly, but we are almost there and enjoy the views and scenes 🙂

In the evening, Mom and Ashley arrived in Istanbul by plane. Yay! We are going to spend 5 days together exploring the city and spending time with each other. We visit the Aya Sofia mosque where we enter another world fully clothed. We eat from the stalls on the street, taste things in the Grand Bazaar and Spice Bazaar. We walk through Orthodox neighborhoods, colorful neighborhoods, take a ferry to the Asian part of Istanbul and watch the fishermen on the Galata Bridge. A visit to a Turkish hamam can’t be missed either. It is a particularly colorful metropolis with 17 million inhabitants. We enjoy each other and all the fun and craziness.

The days in Istanbul fly by and it’s nice to see each other back here. Before we know it, Mom and Ashley are already on the plane back home and a whole new continent with new experiences is waiting for us on the other side of the Bosphorus. Istanbul feels like a first milestone to us. From here we cycle further inland and we are very curious about the rest of Turkey. 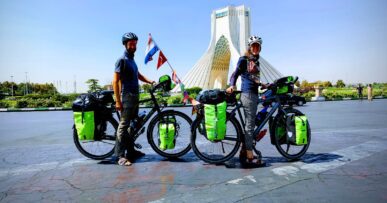 ‘Welcome to Iran my friends’ 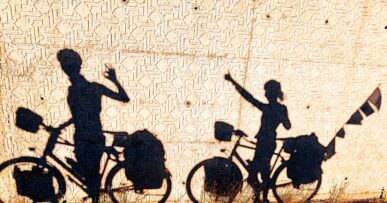 Turkey (part 3): The road to Cappadocia and further east!

This site uses Akismet to reduce spam. Learn how your comment data is processed.